“Anti-Semitism is a two-thousand-year-old virus, apparently incurable. There are always other reasons: Religion, race. But today one does not necessarily say ‘Jews’ – today it is the Israelis, without really understanding the connections or even knowing what is going on behind the scenes”. (Anita Lasker-Wallfisch on 31 January in the German Bundestag)

Perhaps they tolerate the attacks quietly and secretly. Perhaps they themselves would at least perpetrate verbal attacks (they would thus remain largely unrecognized on the internet, and could join a large group of like-minded people). Indeed they are (so far) held back by the public rejection of anti-Semitic acts.

And perhaps this high approval of attacks on Jews also explains the low number of those who gather on Al Quds Day to show solidarity with Jews. Because “Considering the policies made by Israel…”

1083 anti-Semitic incidents were registered in Berlin last year, 14 percent more than in the previous year. For decades, not only the Israeli Embassy, but almost all Jewish and Israeli institutions have had to be guarded by the police around the clock. 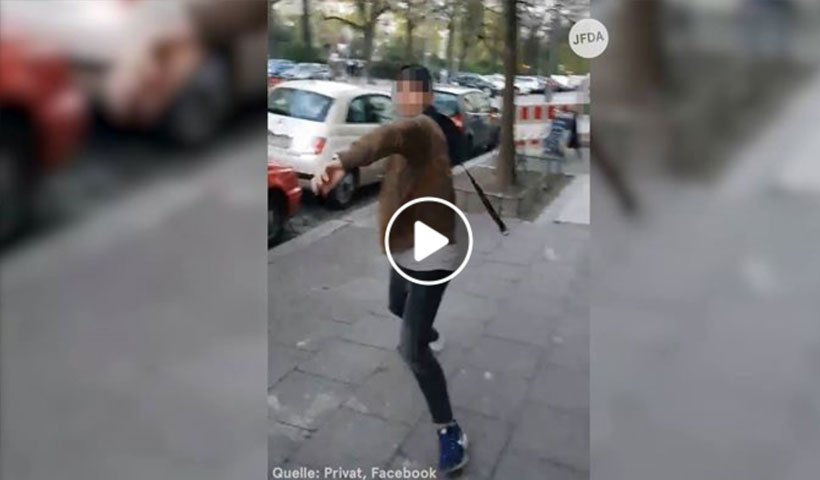 The same person also says: “I don’t give a shit anymore. Adolf Hitler, I’m sorry, he did the right thing for the Jews. The Jews didn’t deserve it any other way.”

On September 8, 2018, a Jewish woman in Berlin-Neukölln makes a late purchase when the seller looks at her David star key ring and yells at her: “Fuck off, you Jewish slut! He starts throwing crown caps and garbage at the woman. He should read a history book, she replies. Then the salesman comes out behind the counter, walks towards her. The woman flees. (according to RIAS – Research and Information Centre for Antisemitism Berlin).

August 2018, a man reads the “Jüdische Allgemeine” in the subway. A passenger then hits his newspaper and leaves the train.

Uwe Dziuballa runs the restaurant “Schalom” in Chemnitz. Every now and then a pig’s head is placed in front of the door, flowers are unearthed, swastikas are smeared on the wall. In August 2018, 12 men stood in front of his restaurant. They shouted: “Jewish Pig, get out of Germany! Glass rattles, he feels a stone on his shoulder. (Die Welt, 30.12.2018)

I guess we’ll have to ask
Missy’s incomplete
Antisemitism FAQ
17.03.18

Thanks to Stella Hindemith and Stefanie Lohaus from Missy Magazine for their thoughts on Antisemitism.

I’ve already learnt so much about the Holocaust in school and used to read a lot of books about it. Do I still have to read your dossier? That’s enough now, isn’t it?

All right, then. But the Palestinians are oppressed by Israel. I think I should be allowed to say that!

Et voilà. That is proof of an anti-Semitic stereotype. Because: There are critical things to read about Israel everywhere. Take a look at the pages of a daily newspaper or a human rights organisation like Amnesty International. A study by TU Berlin, which examined German online media during the Gaza War in 2012, came to the conclusion that the Israel-Palestine conflict was a disproportionately frequent topic compared to other military conflicts such as China or Russia, and that the Israeli military was portrayed as an aggressor in three-quarters of the articles. Why then do so many people claim that Israel is getting away so positively in the media? The statement is not only based on an alleged taboo, but also on the fact that there is someone who successfully enforces this taboo. If in doubt, it is assumed that all people and above all “the media” will follow this taboo. This statement thus ties in with anti-Semitic conspiracy theories that assume a superiority of “the Jews” in the world.

Conspiracy theories? They still exist? The sagas of Zion and so on?

But hello! The effect of the so-called “Protocols of the Wise Men of Zion” – an anti-Semitic inflammatory piece of writing that was circulated at the beginning of the 20th century – can be observed globally in various political currents and groups. According to the “Protocols”, the “Jews” conspired to seize world domination. Current versions of this idea can currently be found in discussions from the political left, which believe that “the Jews” or Israelis are behind the shift to the political right in the USA. In conservative to right circles, one could often hear in earlier times, the “Jews” were behind the Russian revolution and/or behind everything which is somehow to the left. Today people like the AfD politician Wolfgang Gedeon talk about a supposed “Zionist infiltration” of Europe. So this conspiracy theory is a chameleon that adapts to the political world view of the respective group. But the core always remains the same: Behind all political evil are “the Jews” (or Israel).

And then how does Israel criticism work?

Quite simply: not at all. Because where criticism of Israel is found, there is usually anti-Semitism within. But what is possible is to critically examine Israeli politics and history.

How can I tell that this is about anti-Semitism and not about criticism?

The distinction between anti-Semitic resentment and criticism is simple. Criticism is an open-ended process that weighs different aspects. When people describe themselves as “critical of Israel”, the result is usually already certain: Israel is somehow evil. To be honest: In a conversation, you quickly notice whether someone is interested in a discussion or wants to preach. For those who want to know more, there is also the so-called 3D test. The three “D “s stand for delegitimization, demonization and double standards. In delegitimization, Jews are denied the right to self-determination – in concrete terms, Israel is referred to as a colonial or apartheid state, for example. If one follows this logic, the existence of Israel must be questioned – and that was that with the state self-determination of the Jewish people. That is why, by the way, the term “criticism of Israel” – in contrast to a formulation like “criticism of the Israeli government” – is also undesirable because it implies total criticism. Delegitimization usually goes hand in hand with demonization. This includes comparisons of Israel with colonial states, but also with National Socialist Germany. Contemporary interpretations of old anti-Semitic stereotypes can often also be found, for example, when protests are adorned with signs that say “Israel, the murderer of children”. This is reminiscent of the medieval stories of Jews thirsting for children’s blood and who baked matze with blood. Double standards: here it is described that criticism of Israeli politics is anti-Semitic if Israel is required to behave in a way that is not demanded by any other (democratic) state. This includes, for example, accepting terrorist attacks without defending oneself or dissolving one’s own state borders.

But Jews are not really threatened in Germany! In comparison to other problems anti-Semitism is not so bad after all?

In general, these comparisons make us rather unhappy. Violence is violence, and it always affects individuals – number games and statistics do not help us if we want a society based on solidarity. Incidentally, your view that anti-Semitism is not so bad is shared with most people in this country, and above all with non-Jewish people. The independent expert group Anti-Semitism of the Bundestag, states published in its report in 2017 that there is a “perception discrepancy” here, since Jewish women are exposed to an increasing level of threat. The Berlin Anti-Semitism Research and Information Centre counted more than four hundred anti-Semitic incidents in Berlin in 2015. Anti-Semitism is still a core element of right-wing extremism. Attacks on people who are perceived as Jewish, Jewish institutions or demonstrations on Holocaust Memorial Day are therefore part of the everyday business of the Nazis. At the same time, there is the problem that assaults are only perceived as anti-Semitic if they belong to the extreme right. For example, an arson attack on the synagogue in Wuppertal in 2014 was not classified as anti-Semitic in the court decision of 2016, but rather as politically motivated. The judges found that the attack was an expression of “Israel criticism”. The inherent anti-Semitism of institutions such as this one also prevents anti-Semitism from being seen as a problem.

But even the AfD is in solidarity with Israel!

Whew. It’s complicated. Being called anti-Semitic is considered evidence of a right-wing extremist attitude. That is why the AfD naturally does not want to be called anti-Semitic. Some AfD members and politicians are acting in solidarity with Israel. The advocacy of Israel’s right to exist, however, does not show a majority of support, as AfD party conferences have shown in the past. Some AfD party members also see Israel as a kind of bulwark against their main enemy, Islam. The fact that 18 percent of Israelis are Muslims is often ignored. And anti-Semitism within their own ranks is not being taken into account: There is Björn Höcke, who publicly called the Holocaust Memorial in Berlin the “Memorial of Shame”. Or the aforementioned Wolfgang Gedeon, whose publications spread anti-Semitic conspiracy theories. Both politicians were not dismissed from the party despite media scandals. A list of anti-Semitic incidents on the belltower.news website shows that this is only the tip of the iceberg. Individual AfD party members voiced anti-Semitic conspiracy theories, praised Nazi mass murderers, and denied the Holocaust.